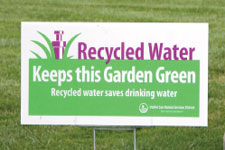 We have blogged about legislation enacted in 2014 that made several changes to Civil Code Section 4735 in response to California’s continuing, record-breaking drought. One of those changes served to prohibit HOAs from fining homeowners for failing to adequately water vegetation or lawns during government-declared drought periods. Earlier this year, AB 349 was signed into law to make further changes to Section 4735. One of those changes served to restore a HOA’s authority to fine homeowners for failing to water, provided that the HOA “uses recycled water…for landscaping irrigation.” (Former Civ. Code § 4735(c).)

Questions then arose as to the circumstances which would allow for a HOA to qualify for this exception and thus be permitted to fine homeowners for failing to water. For example, would a HOA have to use recycled water for all of its landscaping irrigation, or just a portion of its landscaping irrigation? To remedy this ambiguity, AB 786 was proposed this year as an urgency statute based upon the following findings by the California Legislature:

“…some homeowners associations have interpreted existing law to allow them to fine homeowners who voluntarily cease using potable water on their landscaping if the homeowners association itself is using a de minimis amount of recycled water on common areas. This is directly contrary to the state’s need to conserve the precious and dwindling water supplied for urban, agricultural, and environmental needs.”

AB 786 was signed into law on October 13, 2015 and its changes took immediate effect. Subdivisions (c) and (d) of Section 4735 now state in pertinent parts that:

“(c) Notwithstanding any other provision of this part, except as provided in subdivision (d), an association shall not impose a fine or assessment against an owner of a separate interest for reducing or eliminating the watering of vegetation or lawns during [government-declared drought periods]…”

“(d) Subdivision (c) shall not apply to an owner of a separate interest that, prior to the imposition of a fine or assessment as described in subdivision (c), receives recycled water…and fails to use that recycled water for landscaping irrigation.” (Emphasis added.)