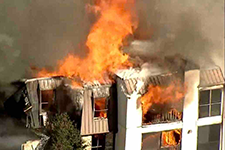 Both Commercial and Residential Condominium CC&Rs frequently contain insurance language requiring the Association to obtain hazard (fire) insurance and prohibiting Owners from obtaining such coverage.  Condominium Owners on the other hand are limited to obtaining liability insurance.  Similar language was found in the CC&Rs of the condominium association in Western Heritage Insurance Company v. Frances Todd, Inc. No. A152428 (Cal. Ct. App. Mar. 4, 2019).  The insurance language for The East Shore Commercial Condominiums located in Berkeley, California included the following:

Article 13.1 requires the Association to “obtain and maintain a master or blanket policy of all risk property insurance coverage for all Improvements within the Project, insuring against loss or damage by fire or other casualty. … The policy shall name as insured the Association, the Owners and all Mortgagees of record, as their respective interests may appear.” Article 13.3 provides in part, “Any insurance maintained by the Association shall contain [a] ‘waiver of subrogation’ as to the Association, its officers, Owners and the occupants of the Units and Mortgagees. …” Article 13.4 prohibits an individual owner from obtaining fire insurance while allowing an owner to obtain individual liability insurance. Article 3.1 requires that all “occupants and tenants” comply with the CC&Rs.

Defendant, Frances Todd, Inc. was a furniture manufacturer; and a tenant leasing a condominium unit in a commercial condominium complex.   The Defendant (tenant) was negligent in causing the fire which destroyed the unit and surrounding units.  Western Heritage Insurance sued the tenant for indemnity to recover all amounts it paid the Association on the Association’s fire damage claim on a theory of the tenant’s underlying negligence.   The court looked at both the CC&Rs and the lease between the Owner and tenant and concluded the Association’s fire insurance policy also benefited the tenant:

The court also noted that:

“In California, courts have held a lessee is not responsible for negligently caused fire damages where the lessor and lessee intended the lessor’s fire policy to be for their mutual benefit.”

Even though the CC&Rs did not specifically state that tenants were to be named as insureds, the Court reasoned that such a conclusion was implied based upon its review of the CC&Rs and the lease between the Owner and the tenant.  The court also noted that the Owner pays for insurance through his or her dues and the tenant contributes to those dues by his/her rent and there is no requirement that a specific amount of dues or rent be allocated for the fire insurance policy.  Therefore, the tenant like an Owner was a beneficiary under the Association’s insurance policy and could not be sued for negligently causing the fire by the Association’s insurance.

Hazard (Fire) Insurance Policies are “no fault” Policies.  They cover Hazards (fires) whether or not they are caused by the Insured’s own negligence.

The fact that the furniture manufacturer tenant was negligent was not an issue in this case.  The only issue was whether they were a beneficiary under the Association’s insurance policy. The court noted that if negligent fires were not covered by fire insurance policies, then insurance companies would be incentivized to litigate the insured’s possible negligence in all fires; and litigation would be never ending:

A fire insurance policy which does not cover fires caused or contributed to by the insured would be an oddity indeed.  Otherwise, few insured fire claims would be paid without controversy and most would require litigation. For that reason we do not deem that a policy ‘for the benefit’ of a lessee excludes coverage for fires caused by his negligence.

How does this case affect the Association’s right to recover Common Area Damages from Owners under Civil Code §6858(b)?

Civil Code §6858 (b) allows the Association to recover damages to Common Areas:

An association has standing to institute, defend, settle, or intervene in litigation, arbitration, mediation, or administrative proceedings in its own name as the real party in interest and without joining with it, the members, in matters pertaining to the following:

(a) Enforcement of the governing documents.

(b) Damage to the common area.

(c) Damage to a separate interest that the association is obligated to maintain or repair.