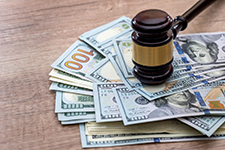 Asked – Is there any way to collect a fine other than going to court?

Answered – Monetary penalties (i.e., fines) are just one of the many tools in a homeowners association’s (“HOA’s”) arsenal to enforce its governing documents. They are primarily used to deter violations, as well as to compel compliance from a member, guest or tenant who is in violation. However, many HOAs find fines ineffective at deterring violations because of the difficulty in collecting the fines once levied.

Indeed, when a member fails to pay regular or special assessments levied by the HOA in a timely fashion, the HOA may record an assessment lien against the member’s separate interest to act as security for the payment of the assessment debt. The HOA then has the power to enforce the lien through, among other methods, foreclosure. Unfortunately, the HOA’s ability to collect delinquent assessments through foreclosure does not extend to the collection of fines:

A monetary penalty imposed by the association as a disciplinary measure for failure of a member to comply with the governing documents, except for the late payments, may not be characterized nor treated in the governing documents as an assessment that may become a lien against the member’s separate interest enforceable by the sale of the interest [through nonjudicial foreclosure].

Accordingly, an HOA is limited to the following methods to collect fines: (1) bring a lawsuit against the member (typically in small claims court unless the amount of the fine(s) exceed(s) the jurisdictional limits imposed under the California Code of Civil Procedure), or (2) wait until the member’s separate interest is sold and make a demand during escrow. Neither situation is ideal because of issues inherent with each.

For example, judicial action can be a costly and time-consuming endeavor. If the HOA prevails, debtors rarely pay judgments entered against them. Thus, it will take time (and money) to secure payment, either through a wage garnishment or bank levy. Moreover, failure to strictly adhere to the HOA’s Notice and Hearing procedure, along with its Enforcement Policy and Fine Schedule, will preclude the HOA from prevailing in an action to collect fines.