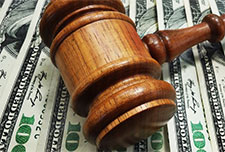 Civil Code Section 5975(c) serves a vital function for any HOA’s enforcement efforts. Should a HOA be required to file a lawsuit to enforce its governing documents, Section 5975(c) entitles the HOA to recover from the defendant homeowner the HOA’s attorney’s fees, provided that the HOA is the “prevailing party” in the lawsuit. This right for a prevailing party to recover its attorney’s fees in an action to enforce a HOA’s governing documents is also commonly found in the provisions of a HOA’s CC&Rs.

But what is the technical definition of “prevailing party?” The Davis-Stirling Act does not define the term “prevailing party,” nor does it provide any metric for making that determination. As a result, California courts have concluded that the test for determining the prevailing party is a pragmatic one—namely, whether a party can be deemed the prevailing party requires a determination that the party “prevailed on a practical level by achieving its main litigation objective.” This test may be relatively easy to apply in some situations, and not so easy in others. For example, assume that a HOA’s lawsuit seeks to recover a substantial sum in fines for an owner’s violation of the rules, but the HOA is only awarded roughly 10% of that amount. Can the HOA be said to have achieved its main litigation objective, despite the fact that the ruling was arguably more favorable to the owner than it was to the HOA?

This hypothetical was actually litigated in the recent case of Almanor Lakeside Villas Owners Assn. v. Carson (2016) 246 Cal.App.4th 761 (“Almanor”).  In Almanor, the defendant homeowners (the Carsons) were sued by the HOA to enforce provisions of the HOA’s CC&Rs relating to short-term rentals. The Carsons disputed the applicability of those provisions to them, as well as the HOA’s attempt to enforce other rules relating to trash storage, common area use, and boat decals, and to ultimately fine the Carsons for their violations of those rules. The trial court ruled that the HOA could enforce its rules and awarded attorney’s fees to the HOA in an amount of roughly $100,000, in addition to $6,620 in fines (approximately 10% of the amount originally imposed by the HOA and sought by it in the lawsuit). The Carsons appealed and lost. The HOA was deemed the prevailing party despite its inability to recover roughly 90% of the unpaid fines it originally pursued in the lawsuit.  The Court in Almanor concluded that the key issue in the lawsuit was the HOA’s authority to enforce the rules and to impose fines for violations, not the amount of the fines themselves. Because the trial court found that some of the fines were enforceable, the Court of Appeal held that the HOA “met its objective” in the lawsuit and was appropriately deemed the prevailing party:

“The fractional damages award does not negate the broader practical effect of the court’s ruling, which on the one hand narrowed the universe of restrictions that [the HOA] could impose on the properties, but on the other hand cemented [the HOA’s] authority to promulgate and enforce rules pursuant to the CC&Rs…Taken together and viewed in relation to the parties’ objectives…we conclude that these outcomes were adequate to support the trial court’s ruling [that the HOA was the prevailing party].” (Almanor, at 775.)