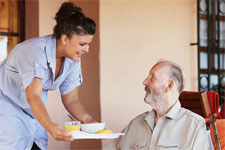 The ability of California homeowners associations (“HOAs”) to adopt and enforce restrictions on the renting of units has been limited by changes in the law over the past couple of years. Those changes have purported to provide greater protections for homeowners seeking to rent out their units to third parties. HOAs have therefore been required to modify their approach to the enforcement of rent restrictions that may be contained in their governing documents, including the adoption of additional rent restrictions binding only on future homeowners.

However, a recent unpublished Appellate Court decision confirms the ability of a HOA to enforce rent restrictions adopted decades in the past that are intended to address the unique concerns and characteristics of the HOA’s development.

The case of Guttman v. Glen Towers Owners Association (“Guttman”) dealt with a rather unique situation involving the renting of “Maid Units.” The HOA is a multilevel condominium development consisting of 61 units. 49 of the units are referred to as “Master Units” located on the development’s upper floors. The 12 remaining units are referred to as “Single Units” located on the development’s ground floor. Each Single Unit consists of a small living space with a bathroom but without a kitchen.

The Single Units are commonly referred to as “Maid Units.” Maid Units are found in older, luxury high-rise condominium developments and are traditionally used as sleeping quarters for domestic workers employed by the owners of the Master Units. This explains why the Maid Units contain a bathroom but do not contain any cooking facilities/kitchens.

In Guttman, the HOA’s CC&Rs contained the following restrictions applicable to the Single Units:

The Plaintiff homeowner in Guttman purchased a Master Unit together with a Single Unit and, several years later, purchased an additional Single Unit. Shortly thereafter, the Plaintiff began renting both Single Units to third party tenants in violation of the applicable CC&R restrictions and in disregard of the HOA’s repeated demands for compliance. For more than two decades, the Plaintiff and the HOA were engaged in a dispute with regard to Plaintiff’s violations and the HOA’s efforts to enforce the CC&R restrictions. That dispute ultimately resulted in the Plaintiff filing a lawsuit against the HOA seeking declaratory relief and damages. The Plaintiff “alleged that the restriction against renting Single Units was ‘vague and ambiguous’ and the HOA’s conduct in preventing Plaintiff from renting his Single Units was ‘arbitrary and/or capricious, and…not rationally related to the protection, preservation and proper operation of the property and the purposes of the [HOA] as set form in its governing CC&Rs’.” The Plaintiff sought declaratory relief against the HOA as well as damages for the loss of past rental income.

In ruling for the HOA, the trial court relied upon expert testimony from a reputable HOA attorney, Mr. Adrian Adams, who explained the history surrounding “Maid Units” and how the restriction against renting them out to third party tenants is intended to address concerns over security, safety and impact on the HOA’s common area amenities:

“… the size of the units often attracts a transient population, which creates a heightened security risk as compared to renter families that generally require a larger unit.”
“…the safety concern stems primarily from the lack of cooking facilities in these units. A domestic employee or family member will normally cook in the upstairs unit’s kitchen. In contrast, renters, who have no access to the upstairs unit, are more likely to bring in a hot plate or cooking stove, which puts a strain on the electrical system and creates a risk of fire.”
“…renters, unlike domestic workers, almost invariably expect that when they rent a single unit they also are paying for access to the common area amenities, such as the use of the pool, gym, valet parking and other facilities.”

The trial court rejected these contentions and found that, as Mr. Adams testified, “the restriction was clear on its face and rationally related to concerns over security, safety and impacts on common area facilities.” The trial court then entered judgment in favor of the HOA and the Plaintiff appealed.

The Court of Appeal affirmed the trial court’s judgment, finding that there was no ambiguity within the restriction, and upholding the trial court’s conclusion that the restriction was reasonable “in view of the Single Units’ unique characteristics and the particular circumstances of condominium communities.” That conclusion was “amply” supported by the expert testimony heard at trial. The Court of Appeal further rejected Plaintiff’s waiver claims based on the Plaintiff’s repeated misrepresentations to the HOA concerning the identity of his tenants over the course of the dispute.