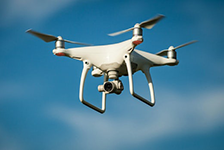 Serial dog poop litterers, unauthorized parking of vehicles, architectural violations, smoking nuisance—the list goes on and on when it comes to common “repeat violations” that a homeowners association (“HOA”) encounters on a day-to-day basis. With the increasing number of repeat violations and limited number of HOA board members and property managers, questions have surfaced whether or not HOA’s may, or should, utilize drones to enforce violations. Specifically, HOA boards are concerned with the legal implications that such utilization may impose because, well, why wouldn’t an HOA board want to send out a drone to inspect an architectural violation or monitor a smoking nuisance in lieu of physically walking to the property to do the same? In addition to the convenience factor that drones provide, it gives HOAs the added benefit of having concrete, recorded evidence should the violation escalate to the level of arbitration or judicial enforcement.

From a legal standpoint, the two primary areas of law that factor into HOA drone usage are (1) privacy law and (2) property law.

In any event, both Provisions hold one liable for invasion of privacy when same utilizes a drone to “capture any type of visual image, sound recording, or other physical impression of the plaintiff [e.g., homeowner] engaging in a private, personal, or familial activity and the invasion occurs in a manner that is offensive to a reasonable person.” (Emphasis added.)  Ah yes, the “reasonable person” standard comes into play here as it does in almost 99.99% of standards used to dictate liability. Interpret it exactly how it sounds. If an HOA is utilizing the drone to capture a serial dog poop litterer in the community park, it certainly would not offend a reasonable person walking their dog in the park, nor would the violating individual have a “reasonable expectation of privacy” (a standard also used to adjudicate privacy suits) on common area owned by the HOA.

On the other hand, if an HOA is investigating a nuisance matter of excessive cigarette and/or marijuana smoke, can the HOA operate a drone from the common area zooming into the living room? Probably not. While one may make the argument that if the smoking activity was viewable in plain sight from common area streets (e.g., curtains wide open) that the individual has no reasonable expectation of privacy, it is likely to fail because the principle of an individual’s right and expectation of privacy within his/her home is held to an extremely high standard. Furthermore, it is best practice for HOA’s to err on the safe side of caution and avoid potential exposure to liability.

In addition to looming privacy concerns, HOAs need to be aware of property laws that protect homeowners from drone usage; in particular, communities that consist of single family homes wherein the homeowner owns the airspace above the land. In the early stages of property law (also known as “common law”), the principle that controlled for centuries was “[w]hoever’s is the soil, it is theirs all the way to Heaven and all the way to hell.” Of course, this has changed over the years with the evolution of mankind and (flight) technology starting with the groundbreaking U.S. Supreme Court case United States v. Causby, wherein the Court held that homeowners owned the airspace above ground level up to 365 feet (anything above that was public domain).

Today, homeowners own the airspace 500 feet above ground level in “uncongested areas.” (14 CFR § 91.119(c).)  This is the standard generally applied to airspace demarcation in residential communities (i.e., HOA’s).  See Lacey v. United States, 595 F.2d 614 (1979); see also Aaron v. United States, 311 F.2d 790, 801 (1963).   The idea behind this is to give homeowners property rights to their parcel of land as high above it as “normal use of the land” requires. As such, unless the drone is capable of operating in excess of 500 feet above ground level (at which point no practical HOA purpose will likely be served), under very limited circumstances should a drone ever be hovering above a homeowner’s physical land or airspace.