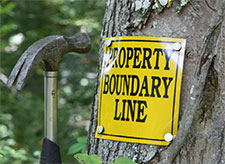 Rural, equestrian, and large-scale planned developments may include properties with spacious lot sizes bordered by common area lots and open spaces. When property lines are not clearly delineated or easily identified in these communities, there may be instances where a homeowner seeks to expand his property by constructing yard improvements that extend beyond his property line and encroach onto adjacent, HOA-owned common area. If this is not discovered and addressed by the HOA in a timely fashion, there are avenues under California law through which the homeowner may assert that he has obtained an easement over (and in extreme circumstances, actual ownership of) the encroached area. The thought of a homeowner annexing common area for his/her own use is a scary thought, as is the prospect of the HOA failing to prevail in costly litigation that may be needed to reclaim its common area.

Fortunately, the recent holding in Nellie Gail Ranch Owners Association v. McMullin (2016) 4 Cal.App.5th 982 (“McMullin”) helps strengthen a HOA’s ability to defeat a homeowner’s attempt to encroach onto common area and claim it as his own…

In McMullin, the defendant homeowners (“Defendants”) constructed a retaining wall and other improvements upon approximately 6,000 square feet of an adjacent common area lot. Because of the rural nature of the HOA, the trespass went undiscovered for several years. When it was discovered and the HOA’s demands to remove the unapproved improvements fell on deaf ears, the HOA sued the Defendants to quiet title to the disputed area, and to compel the removal of the improvements together with the restoration of the disputed area to its previous “native” condition—all at the Defendants’ expense.  The HOA prevailed at trial and was awarded its attorney’s fees. The Defendants then appealed the trial court’s ruling.

On appeal, the Defendants asserted three (3) primary arguments in support of their position: (1) that the HOA was equitably estopped from bringing its lawsuit, (2) that the Defendants had acquired ownership of the disputed area through adverse possession, and (3) that the trial court erred in granting an order compelling the removal of the unapproved improvements at the Defendants’ expense because the HOA should have instead been required to accept monetary damages as compensation in exchange for an equitable easement granted to the Defendants. Each of the arguments is addressed below.

Equitable estoppel is a doctrine that is codified in California Evidence Code Section 623, which states:

The Court of Appeal disagreed, and pointed out that any alleged “reliance” on that information from the HOA came well after the unapproved improvements were constructed. Additionally, the Defendants could not establish one of the essential elements of equitable estoppel because the HOA was unaware of the extent of the Defendants’ encroachment onto HOA common area at the time it decided not to pursue the matter as a CC&R violation. The fact that the Defendants continuously and deliberately concealed the true location of their rear property line when submitting for HOA approval also undercut the Defendants’ argument.

Adverse possession is a legal doctrine that allows trespassers to become owners of the land that they wrongfully occupy. Although the name sounds distasteful (and the results can be), the trespasser is not necessarily acting with malicious intent. In some instances, the trespasser may have made a mistake by relying upon faulty deed information or property descriptions.

The Court of Appeal struck down this argument for numerous reasons. One of the primary reasons was because of the nature in which common area lots are valued and ultimately taxed. It is true that a HOA may not be issued property tax bills for specific common area lots. This does not mean, however, that common area lots have no value or that no taxes are paid for them. California Revenue and Taxation Code Section 2188.5 states that all parcels owned by individual owners within a HOA are assessed property taxes not only on the value of their separate lots, but also on the value of their proportionate share of all common areas owned by their HOA. In other words, the taxes associated with common area lots are assessed to, and paid by, each of the HOA’s property owners as part of their individual property tax bills. Accordingly, the taxes for the disputed area were paid in part by each of the HOA’s roughly 1,400 members—not solely by the Defendants. The Defendants therefore failed to meet their burden to show that they were not required to pay property taxes on the disputed property, and the trial court properly found that their adverse possession claim failed as a result.

A court has the discretion to grant an equitable easement to a trespasser by balancing the hardships to either party, and by finding several factors to be present. One of the primary factors is that it must be shown that the trespassers were innocent; that the encroachment was not willful or negligent. The Defendants were unable to satisfy this requirement because they knew where their actual rear property line was located, they intentionally did not identify it to the HOA, and they began construction knowing they did not have the necessary HOA approvals.

All of the Defendants’ arguments were thus defeated and the Court of Appeal ultimately affirmed the trial court’s ruling.  The Defendants were required to restore the disputed area to its prior condition, at their expense, as well as pay over $200,000 in attorney’s fees to the HOA.