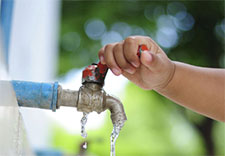 In April of last year Governor Brown ordered mandatory water use reductions for the first time in California’s history in order to address the prolonged California drought crisis. That order directed the State Water Resources Control Board (SWRCB) to impose a twenty-five percent (25%) reduction on the state’s 400+ local water supply agencies. Complying with these mandated reductions caused communities throughout the state to immediately and drastically address their water usage and conservation practices, and to incur significant expense in doing so. This order was issued amidst a string of legislative and regulatory changes aimed at addressing the historic drought. For example, legislation was enacted to prohibit homeowners associations (HOAs) from fining homeowners for failing to water their lawns during the drought, and the SWRCB adopted emergency regulations that subject HOAs to fines of $500 per day for failing to comply with the SWRCB’s restrictions on potable water use.

In an apparent policy reversal, yesterday the Governor lifted the 25% mandated statewide water reduction. The Governor’s new executive order directs the SWRCB and the Department of Water Resources (DWR) to work with water suppliers to develop rules and water use targets that are tailored to the unique conditions of their respective regions.

Under the new rules, which take effect on June 1, communities would set water reduction guidelines based on their own projection of water supplies with the assumption that the next three (3) years in California will be uncommonly dry. The state would then review the projections and impose restrictions on communities it determines are being unrealistic. These rules and restrictions are consistent with legislation proposed earlier this year (SB 814) that, if adopted in its current form, would require water suppliers to establish their own methods to identify and restrict excessive water use.