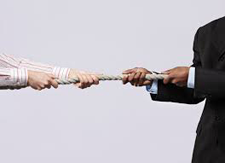 What Should the Board Do If There Is A Potential Or Actual Conflict Of Interest?

Pursuant to Corporations Code section 7212, the Board may, by resolution adopted by a majority of the number of Directors then in office, provided that a quorum is present, create an executive committee consisting of two or more Directors, to serve at the pleasure of the Board.  The Board has complete control over all committees.  This means that the Board will decide who may serve in the committees and what authority they will have, subject only to the restrictions in the governing documents.

Accordingly, if there were any potential or actual conflicts as mentioned above, legal counsel for the association should broach the idea of the Board creating an executive committee around the conflicted Director.  While Directors are well-meaning, if their financial interests, property, or personal self are implicated in any way, it would be difficult for the respective Directors to act as a Director (i.e., in good faith and in the best interest of the HOA) and not as a homeowner.  This could be quite detrimental for the HOA and possibly even for the Director themselves because if there is an actual conflict of interest, that Director would be exposing themselves to personal liability; and the HOA’s Directors and Officers insurance might not be applicable if the Director acted outside the scope of their duties and decided on matters in such a way that would not benefit the HOA.

Therefore, it would be prudent to resolve any potential conflicts of interest by removing the Director from any decision they might be personally involved in and forming an executive committee around that respective Director.  Should the Board have difficulty with this task, it might be best to enlist legal counsel’s help in explaining liabilities and conflicts of interest to all parties involved.