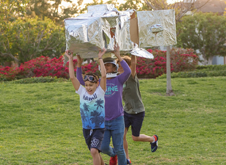 Children are usually considered blessings and a joy to be around.  Unfortunately, there is always one slightly rambunctious child who may be prone to causing trouble in Homeowners Associations (“HOAs”).  What should an HOA and/or Board of Directors (“Board”) do in such scenarios?  Is there anything the HOA can legally do?

The U.S. Supreme Court and federal court recognize parents’ constitutional rights to the care, custody, and control of their children.  The Supreme Court explained that the Due Process Clause of the Fourteenth Amendment protects “the right to marry, establish a home, and bring up children.”  (Meyer v. Nebraska (1923) 262 U.S. 390.)

While we understand that disturbances to other members and common areas caused by a child might place everyone in a state of discomfort, the HOA should not interfere in situations where parental rights might be in question—especially in situations where there have been no obvious or implied threats to the community members’ health and safety.

Even should management report the incident(s) to the police (on the theory that the child might be a danger to the community) or child protective services (on the theory that the child might be in an unhealthy home environment causing the child to act in such a way), it is unlikely for the government to take any action beyond filing a report at such an early stage.  Unless the situation is dire, the government usually prefers to remain out of familial matters.  The Second Circuit held “[T]he right of the family to remain together without the coercive interference of the awesome power of the state . . .encompasses the reciprocal rights of both parent and child.” (Duchesne v. Sugarman (1977) 566 F.2d 817, 825.)  The Supreme Court held that even after parents are found unfit in a contested court proceeding, they retain constitutionally protected parental rights. (Santosky v. Kramer (1982) 455 U.S. 745.)

HOAs should not assume the powers of the U.S. government and place themselves in a situation of interference with parental rights.  Such a scenario could cause unwanted liabilities for HOAs.  If the child at question has a disability/special needs, that child and its family would be a protected class under the law.  Protected classes may not be discriminated against and, in most cases, may be granted reasonable accommodations from governing document provisions.  The parents and child might sue the HOA for discrimination and harassment, especially if the parent of the child has already warned the HOA to refrain from approaching the parent and/or child.  Such a lawsuit would not be favorable to any HOAs.

Accordingly, we advise HOAs to proceed with caution and to start with a simple reminder of obligations letter to the Owner of a property within community if the Board believes it would be in the best interests of the HOA to take action (i.e., benefit the health and safety of all HOA members/residents).  It might even be better to wait until another incident with the child occurs before sending the reminder of obligations letter.