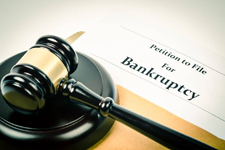 Asked – Our HOA Board of Directors has been advised that a homeowner who is delinquent in their payment of assessments has filed bankruptcy. If the homeowner obtains a bankruptcy discharge does the HOA have to write off the delinquent account as a bad debt?

Answered – Not necessarily. While a homeowner declaring bankruptcy affords them various protections from creditors attempting to collect debts, such as the imposition of an automatic stay, the Association is not necessarily without recourse if the Homeowner achieves a discharge.

The most common two (2) types of bankruptcy actions that may impact an HOA’s collection of delinquent assessments are Chapter 7 (liquidation) and Chapter 13 (repayment plans). Each type of bankruptcy filing has varying attributes that may uniquely apply to an HOA.

For a homeowner who achieves a discharge of the homeowner’s personal obligation to repay pre-petition debts, a discharge would not affect the HOA’s assessment lien or judgment lien with the right of judicial foreclosure that was recorded prior to the bankruptcy filing. Because the liens are recorded against the homeowner’s property, they are non-dischargeable in the bankruptcy case. As a result, once the homeowner achieves the discharge, the HOA can still proceed with foreclosure of the property and satisfy the delinquency through that mechanism. This may also incentivize the homeowner to enter into a reaffirmation agreement to voluntarily repay the pre-petition debts to avoid foreclosure of the HOA’s lien.

Considering the foregoing, it is incumbent on all Boards to ensure that they secure a homeowner’s debt through an assessment lien to ensure, among other reasons, that the HOA still has recourse against a homeowner who declares bankruptcy and obtains a discharge.