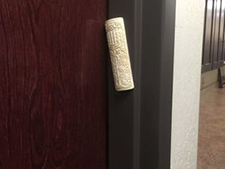 On July 30, 2019, SB 652 was signed into law by Governor Gavin Newsome in response to several incidents in which a homeowner’s association (HOA) asked a resident to remove a mezuzah from their unit’s entry door or doorframe.  A mezuzah is a small scroll that is affixed to the doorframe of Jewish homes to fulfill the mitzvah (Biblical commandment).  For observant Jews, this is not a choice, but rather, a religious duty.  Attempts to bar them from fulfilling this duty violated their religious freedom, argued Jewish residents.

In Connecticut, an HOA threatened to fine a resident fifty ($50) dollars if she did not remove the mezuzah affixed to her doorframe.  The HOA permitted religious displays (e.g. Christmas wreaths) on doors, but restricted any adornments from being placed on exterior walls.  The HOA argued that doorframes are considered exterior walls.

In Florida, an HOA ordered a resident to remove a mezuzah, citing its bylaws prohibiting owners and occupants from attaching, hanging, affixing or displaying anything on the exterior walls, doors, balconies, railings and windows of the building.

In New York, an HOA fined a resident fifty ($50) dollars for affixing a mezuzah to her doorframe shortly after she moved in.  The HOA cited its bylaws prohibiting residents from altering the exterior of their home without approval from the Association.  The rule included affixing of signs, advertisements or statuary.

While there were only a handful of instances nationwide in which a resident was asked to remove a mezuzah, the bill was designed to have a broader scope in protecting any displays of religious items on doors and doorframes so long as the display reflects “sincerely held religious beliefs.”  Specifically, SB 652 prohibits a “property owner” (defined to mean an HOA, an HOA board, or landlord) from adopting or enforcing any rule that prohibits the display of one or more “religious items” on an entry door or doorframe.  The bill defines “religious item” to mean any item displayed “because of sincerely held religious beliefs.”  The bill also identifies reasonable exceptions, such as allowing an HOA or landlord to prohibit the display of anything that threatens public health or safety, violates existing law, contains obscenities, hinders the opening or closing of any entry door, or is larger than 36” by 12” inches.  Also, an HOA may require a separate interest owner to remove a religious item as necessary to perform maintenance on a door or doorframe.

Prior to SB 562, federal and state law provided some protections against religious discrimination in housing, but the author of the bill believed that these protections were not sufficient enough to protect the display of religious items.   For example, the federal Fair Housing Act (FHA) prohibits housing discrimination on the basis of religion.  Likewise, the state Fair Employment and Housing Act (FEHA) makes it unlawful for the owner of any housing accommodation to discriminate against or harass any person because of the religion of that person. (Gov. Code § 12955.)  The Davis-Stirling Act, which regulates homeowner’s associations and common interest developments, contains a provision that prohibits the HOA governing documents from prohibiting the posting or displaying of noncommercial signs, posters, flags, banners, on or in an owner’s separate interest, subject to certain exceptions.  (Civil Code § 4710.)  To the extent that a “religious item” is a sign, poster, flag, or banner, one could argue that existing law already prohibits an HOA from adopting or enforcing any rule that bans the display of religious items.  But arguably there is a question of whether a mezuzah or cross hung from a door is a “sign.”  SB 562 eliminates that ambiguity by protecting any “item” which is displayed because of a sincere religious belief, whether or not it is a “sign.”

SB 652, which takes effect January 1, 2020, will likely conflict with many HOA policies, which have aesthetic and architectural rules that bar hanging anything on an entry doorframe.  According to the author of the bill, such restrictions from HOAs leave the affected people unable to freely practice their religious obligations and in some instances are forced to leave their residence and seek another place to live.  By passing this bill, California’s legislature has followed the recent trend in caselaw suggesting that the religious freedom of individuals should take precedence over the communal interests of homeowner’s associations.