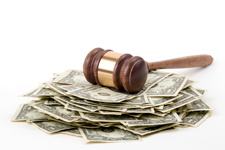 Asked – How long should homeowners associations levy compliance fines against non-compliant Members before transferring the files to legal counsel?

Answered – Monetary penalties (also known as “fines”) should be levied against non-compliant homeowners so long as the purpose of the fines is to deter the homeowners’ unwanted behavior and resolve their outstanding violations.  Fines should never be levied to punish the homeowners or raise money for the association.  As soon as it becomes clear that fines are not effectively compelling compliance with the governing documents, the Board of Directors (“Board”) should consider alternative enforcement strategies, like Alternative Dispute Resolution (“ADR”) or litigation, in lieu of continued fines.

Associations have a duty to enforce their governing documents. (Nahrstedt v. Lakeside Village (1994) 8 Cal.4th 361, 383.) Typically, the governing documents also grant the Board with rulemaking authority, which impliedly authorizes the Board to compel compliance with those rules by imposing monetary penalties. (Liebler v. Point Loma (1995) 40 Cal.App.4th 1600, 1613.) All fines must be levied in accordance with the association’s published fine schedule, which should be distributed to Members in the annual policy statement.

In order for compliance fines to be enforceable, the Board must ensure that the fines are reasonable.  There is no bright line rule to make this determination.  Instead, the Board must consider whether the fine amount actually serves to deter homeowners from violating the governing documents.  This requires Boards to tailor the fines to the demographics of their communities. What is reasonable in one community may not necessarily be reasonable in another.

If, after imposing several fines, an association is not able to compel a homeowner to comply with the governing documents, then the Board should not continue to levy additional fines. Otherwise, the association may be unable to collect those fines, as they were not reasonably levied to compel compliance.  Similarly, Boards should consider waiving previously imposed fines after homeowners comply and resolve their outstanding violations, as the fines served their intended purpose.