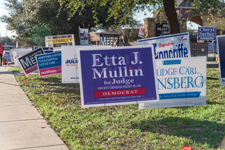 As we draw near to the 2020 election, many residents living in HOAs have decided to install yard signs and other displays for their chosen candidate or cause. Many of these “noncommercial” signs have sparked fury in those who oppose such views, calling upon the Board of Directors to have such signs removed. Thus, in recent months, we have received numerous requests from our clients to provide an opinion as to the extent to which a HOA may regulate the display of such non-commercial signs.

It is without doubt that we currently live in a society with varying opinions on political and social issues. Such division has only become more polarized with recent events.  While some might find the opinions espoused by certain groups repugnant, upholding a resident’s right to express those beliefs and opinions through the display of signs on their property is more important than the minor discomfort some may experience in observing such signs. The only other option would be to prohibit residents from displaying any signs concerning issues of politics and social justice, something which the California Legislature has expressly forbidden: “[H]omeowners throughout the state shall be able to engage in constitutionally protected free speech traditionally associated with private residential property” and “shall be specifically protected from unreasonable restrictions on this right in the governing documents.” (Historical and Statutory Notes, 8 West’s Ann. Civ. Code (2007 ed.) foll. 1353.6, p. 184.)

Indeed, under California Civil Code section 4710(a), “[t]he governing documents may not prohibit posting or displaying of noncommercial signs, posters, flags or banners on or in a member’s separate interest, except as required for the protection of public health or safety or if the posting or display would violate a local, state, or federal law.” Some may nevertheless argue that certain noncommercial signs incite terror and/or rioting and therefore must be removed “for the protection of public health [and] safety.” Although such argument is speculative at best, Section 4710’s concern with public health and safety relates to concerns relative to the placement of such signs (e.g., view obstructions), not the fact that some might have an adverse emotional or physical reaction to such signs.

Inquiries have also been made concerning a HOA’s ability to restrict the number of noncommercial signs placed on a resident’s separate interest, as well as the duration of their display. Section 4710 does not address the number of noncommercial signs that may be displayed by a particular resident. However, in Fourth La Costa Condominium Owners Association v. Seith, the Court saw “no problem with allowing only one sign per unit,” and requiring that they be removed after a particular duration. ((2008) 159 Cal.App.4th 563, 581.) While Fourth La Costa pertained to real estate signs (i.e., commercial signs), the Court’s reasoning could similarly apply to restrictions on the number of noncommercial signs as well as the duration of display. (See id. at p. 581 (upholding the HOA’s decision “for aesthetic purposes”).) A HOA’s ability to regulate the number and duration would be further supported if the city/county in which the HOA is located has also promulgated codes/ordinances regulating the installation of political signs on a resident’s separate interest.

Again, it is important to recognize that many residents might find some of the political and social views promoted by their neighbors as offensive. Because they live in a HOA, they must necessarily tolerate differing viewpoints and loyalties. As the California Supreme Court has said, “[t]he very existence of organized society depends upon the principle of ‘give and take, live and let live’….” (San Diego Gas & Electric Co. v. Superior Court. (1996) 13 Cal.4th 893, 937-38.) Therefore, in response to resident complaints, such residents should be informed of the limitation imposed by Section 4710 and directed to “avoid further bombardment of their sensibilities simply by averting their eyes.” (Cohen v. California (1971) 403 U.S. 15, 21.)