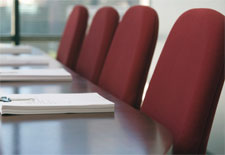 HOA board meetings are governed by the “Common Interest Development Open Meeting Act” (“Open Meeting Act”)(Civil Code Sections 4900 through 4955). The Open Meeting Act is designed to bring a sense of transparency to HOA governance, and is similar in purpose to California’s “Brown Act” (Government Code Section 54950 et seq.) which guarantees the public’s right to attend and participate in public meetings of local legislative bodies (i.e. City Council Meetings). Both the Open Meeting Act and the Brown Act include, among other procedural requirements, language regarding the notice that must be provided in advance of HOA/legislative body meetings, respectively.

In June 2015, the California Court of Appeal rendered an opinion which addressed a notice requirement under the Brown Act. In Castaic Lake Water Agency v. Newhall County Water District, et al, Castaic Lake Water Agency (“Castaic”) moved the trial court to declare void an action taken at a public meeting because the related agenda identified an incorrect Government Code section as the basis for the scheduled action to be taken at that meeting. In dismissing Castaic’s action, the Court held that substantial compliance with the Brown Act is the governing test, and that the notice given by Newhall Water District in the agenda was sufficient to inform the public of the purpose of the meeting.