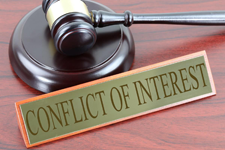 Under the Business Judgment Rule, volunteer directors are shielded from liability for decisions made when those decisions are (1) consistent with the director’s duties, (2) made in good faith, and (3) in a manner it believes to be in the best interests of the HOA and its members. (See Lamden v. La Jolla Shores Clubdominium HOA (1999) 21 Cal.4th 249, 265; see also Dolan-King v. Rancho Santa Fe Assn. (2000) 81 Cal. App. 4th 965, 979.) However, as clarified in the recent case of Coley v. Eskaton, the Business Judgment Rule does not uphold decisions made by directors “acting under a material conflict of interest.” ((2020) 51 Cal.App.5th 943 (“Coley”).)

In support of his allegations, Owner Member provided evidence that Directors improperly “voted to require the Patio homeowners to cover 83 percent of the cost associated with security services,” as well as imposed an assessment on the Patio homeowners to cover litigation expenses. (Id. at p. *7.) The result was a financial benefit to the Eskaton Village (and subsequently, the Directors). Additionally, one of the Directors improperly shared the Association’s attorney-client privileged information with Employer and Employer’s legal counsel. (Id.)

Employer and Directors objected to Owner Member’s argument that the foregoing actions constituted a breach of Director’s fiduciary duties to the Association and its members. In support of their objection, they argued that Owner Member failed to adequately demonstrate that Directors’ conduct “was motivated by specific self-interest,” that Directors “benefited from their breach of fiduciary duty,” and that Directors’ actions “amounted to mismanagement of the [Association].” (Id. at p. *51.) However, the Court of Appeals rejected Employer/Directors arguments concluding that “[o]nce [Owner Member] established the existence of a fiduciary relationship, breach of fiduciary duty, and damages, he was entitled to damages absent some applicable affirmative defense.” (Id. at p. *55.)

The Court noted that Owner Member satisfied this burden: (1) Directors, as members of the Board of Directors for the Association, owed fiduciary duties to the Association and its members; (2) Directors breached those duties by: (a) requiring Patio owners to pay a greater share of the security-services fees and legal fees” in violation of the CC&Rs, and (b) disclosing Association’s attorney-client privileged communications with Employer and Employer’s legal counsel; and (3) Owner Member (and other Patio owners) were injured as a result of the breach. (Id. at pp. **52-55.) And, as noted earlier, the Business Judgment Rule defense did not apply because Directors were acting under a material conflict of interest. As a result, liability was imposed against both Employer and against each Director personally.