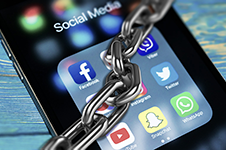 Like it or not, we live in the age of social media. It is undeniable and has dramatically transformed the way we communicate in every arena, including homeowners associations (“HOA”).  Information, opinions and images are broadcast and circulated at a rapid pace with little or no oversight involved.  These unfiltered transmissions over social media airwaves can have profound impacts on homeowners associations’ governance (board of directors), as well as its membership (homeowners).  Understanding the legal implications of social media use in the context of managed communities is critical to avoid conflicts, unexpected costs and legal battles.

In recent years, we have seen a myriad of lawsuits stemming from social media abuse:  In Tennessee, a homeowner faced legal action from her HOA for using the name of her subdivision on her personal Facebook neighborhood page.  In New York City, co-op residents aired their dirty laundry online, resulting in multiple lawsuits.  Elsewhere, a vacation-condominium owner sued a guest for $15,000 over negative social media comments.

It is not uncommon to find defamatory language being hurled at board members or management by disgruntled homeowners on online community forums, board members purporting to speak on behalf of the association on their personal Facebook pages, and association social media channels turning into de facto board meetings in violation of state law and governing document protocols.

These problems arise largely due to an inherent discord between the nature of social media and how community associations operate.  Association managed communities are highly regulated and restricted – indeed, their chief governing instrument is titled Covenants, Conditions and Restrictions (“CC&Rs”). To the contrary, social media regulation is grossly inadequate.  Simply put, people are free to share their thoughts and opinions without real consequences, which often leads to capricious communications.  However, people cannot do this in community associations. For instance, homeowners cannot blurt out opinions in board meetings – in fact, homeowners are often not even allowed to speak, unless given permission.

Unfortunately, the legal landscape has been quite slow to catch up with the problems associated with unbridled communication.  There are few, if any, state laws to govern the use of social media in the realm of corporate governance.  Moreover, developers who write the CC&Rs are focusing on issues like special assessments and architectural approval, not whether board treasurer Bob has the right to post his opinions on the clubhouse renovation on Twitter.

The Board has the power to adopt a social media policy. The policy should establish whether an association can or cannot have an official social media channel, whether board members can or cannot have their own independent social media channels representing the association, and what can and cannot be communicated on a board’s social media page.  When establishing a social media account, it is strongly advised to set a few ground rules for how members should interact while on the site.  Users can be restricted from posting anything offensive, false, or hurtful.  The administrators of the site can moderate comments and block anyone who disregards these guidelines, so that the site is not an open forum for negative or inflammatory comments.

Advise the board and homeowners that comments on Facebook, Instagram, Twitter or other social media channels do not constitute written notice, and will not be recognized as such in court.  For example, a written warning regarding an infraction of the CC&Rs will not be considered legitimate if the interaction took place on social media.

The most effective way to keep an association’s Facebook page from turning into social media mayhem is to make it private and have members agree to certain rules when they join.  This will help maintain civility in the social media channels.

It is important for all members to realize that everyone in the community shares the common goal of maintaining property values.  This requires a collective and conscientious effort to maintain a positive reputation for the neighborhood.  The association’s and the homeowners’ social media representations of the community should be considered marketing.  The social media page should represent a professional aspect for any potential homeowners.  Board members share in this responsibility and must exercise care on their personal social media pages, as well.  Board members should always remember that at the end of the day, the homeowners association is a business. Having this mindset will help everyone to post appropriately on social media.

When it comes to utilizing social media, the best way to stay out of trouble is to always stick to the facts when posting information.  For example, it is acceptable to post information about the new pool code, upcoming meetings, and the appointment of a new board member.  However, it is best to avoid opinions or viewpoints at all times to keep inflammatory arguments from rising.  In addition, an association should never use social media for record keeping, disseminating official communications, sending out ballots, fines or announcements.