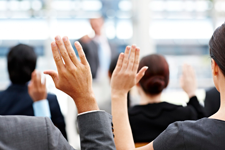 Answered – It is not uncommon for an association to suffer from “member apathy.” Such apathy is most commonly apparent when it comes time to hold the association’s annual membership meeting (“Annual Meeting”). In order to hold an Annual Meeting (or a special meeting of the members (“Special Meeting”)), a quorum of the membership must be present in person, by written ballot, or, if allowed by the association’s Bylaws, by proxy. Quorum requirements vary.

The appropriate procedure for adjourning an Annual or Special Meeting is usually set forth in the association’s Bylaws. Nevertheless, California Corporations Code section 7512(d) states that, “[i]n the absence of a quorum, any meeting of members may be adjourned…by the vote of a majority of the votes represented either in person or by proxy….” (Emphasis added.) Thus, the following procedure should be employed:

It is also important to point out that the association cannot correct this deficiency by distributing notice to the membership of the new meeting date. That is because the motion to adjourn to a later date is a procedural prerequisite; meaning, the motion must occur in order to the hold the meeting in the future. Thus, if the association desires to move forward with the Annual or Special Meeting, and the motion was not properly made (or made at all) it will need to restart the process.