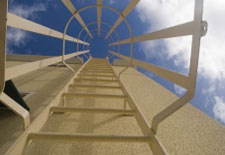 A recently decided case held that the California Occupational Safety and Health Act (Cal-OSHA) did not impose on a Homeowners Association (HOA) any duty to an independent contractor who was injured in a fall while servicing AC units on rooftops at the HOA complex.

In Iversen v. California Village Homeowners Association, 2011 WL 1034261 (“Iversen“), an independent contractor brought premises liability and negligence causes of action against a HOA seeking damages for injuries he sustained in a falling from a ladder while servicing the HOA’s AC units. The independent contractor alleged that the HOA failed to provide a ladder that complied with Cal-OSHA regulations–a set of provisions that are “intended to assure safe and healful working conditions” for workers in California. The HOA moved for summary judgment by contending that it was not required to comply with Cal-OSHA because the plaintiff was an independent contractor and could not establish that the HOA owed him a duty of care or breached a duty of care.

The requirements of Cal-OSHA are traditionally used in proceedings against employers for the purpose of maintaining and enforcing employee safety. However, the court in Iversen was forced to address the unsettled issue of whether the provisions of Cal-OSHA can be used by an independent contractor in a tort action where there is no formal employment relationship.

In making its final determination, the court looked to the provisions of Cal-OSHA, as well as its legislative history and evolution through California caselaw, to underscore a subtle but important distinction between an “employee” and an “independent contractor”. The court ultimately held that the provisions of Cal-OSHA should not apply to the HOA because an “independent contractor is not a member of the class of persons that Cal-OSHA was created to protect.” The absence of a formal employment relationship meant that the independent contractor could not use Cal-OSHA to establish a negligence per se cause of action against the HOA.