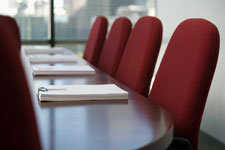 When Senate Bill 563 (“SB 563”) was signed into law this month, the fears of many people within the Community Association industry came true. The new legislation purports to provide better homeowner awareness of the affairs of their respective Associations and the ways in which those affairs are being managed by their elected Boards of Directors. However, many industry professionals and Board members are concerned that the new legislation will restrict a Board’s ability to take the actions required to efficiently address the day-to-day issues that arise within their communities.

SB 563 amends several sections of the California Civil Code–most notably Section 1363.05, known as the “Common Interest Development Open Meeting Act.” The amendments include new restrictions on actions without a meeting and what matters may be considered at a meeting. The amendments also provide new requirements with respect to meetings held in executive session as well as requirements for meetings held electronically or by teleconference.